For us it was a great adventure hiking along the Odontotos railway tracks. I hope to be able to transport some of the impressions we got. Other than that if you aim on doing the trip yourself you can read this as a sort of guide with good info on what will await you. In either case: enjoy.

In the north east of Peloponnes (Greece) lies the village of Diakofto (Διακοφτό), directly next to the sea. Having travelled through Greece, Diakofto in my opinion is neither especially beautiful nor has to offer great beaches. It is neither overly touristic nor “typical greek”. Diakofto has to offer something uniquely special though.

A few times a day it is the starting point for the so called Odontotos train connecting Diakofto with a small village in the mountains called Kalavryta.

Odontotos is a single track railway covering 700 height meters from sea level and runs through steep and tight passages, through tight and dark tunnels and over impressive metal bridges leaving no space for a floor to see if you dare look out the window when it crosses one of these. The trains primary means of motion is its Diesel engine with a solid 25 km/h average speed. Because of the steepness of the railway it has to rely on its “teeth” – thus its name Odontotos (originating from Dontia, meaning teeth in greek). The secondary motion system (rack railway) springs into action every once in a while, the average speed around 6 – 10km/h. The whole scenic trip to Kalavryta takes around 1 hour with a station in Zachlorou.

The village of Kalavryta (Καλάβρυτα)

At the end of the train line you will find beautiful, yet touristic Kalavryta. It is perfect for families and elderly people and fairly priced. Straying off the used paths of tourists and looking around a little we found great spots to train (Parkour) even at this remote mountain village. The village itself seems to be active in winter as well as Kalavryta seems to be a winter vacation location too, which is rarely seen in Greece. After a coffee and some training we waited in the historic train station for Odontotos to carry us back down to Zachlorou from where we would start our hike to Diakofto again. The part between Kalavryta and Zachlorou is not as eventful to hike so we left that out and saving our energy, also knowing we would still hike for 6 hours if we wanted to include the monastery Megaleo Spilaio.

We got off at Zachlorou and started our ascent. It took us an hour to get to the monastery, because we got off track at one point and had to retrace our route to find where we went wrong. No biggie, but it cost us a few minutes. The monastery itself is huge. It’s carved into the mountain and can be visited for free (2 euros for their museum if you want to see that). Inside the 8 story monastery is a cavelike yard with trees and a few beams of sunlight. We grabbed a coffee at the touristic tavern with a beautiful view over the valley before heading to Zachlorou again for descending to Diakofto by foot.

We did the ~13 to 15km in ~3 – 4 hours, walking slow and steady, taking pictures of the amazing view. The hike is nothing less than a spectacle. But you need to be prepared. As some passages of the tracks are so narrow that a hiker would not fit at the same time with the train, I strongly advice to keep the timetable of departures of the Odontotos in mind. If you estimate the time the train needs to reach you, you can find a comfortable spot to let the train pass and wait it out. Worst case would be meeting it up on one of those bridges or in a tunnel, that would suck. We got assured though that in the worst case the train can stop and the hikers need to back up to let the train pass. I doubt the drivers ability to make a full break in the tunnels though.

In our case there was only 1 train left going that day and after our first 20 minutes hiking we comfortably waited for it to pass by. After that we knew the tracks were free. Another thing to consider while hiking is rock slides and falling stones. In the narrow passages we chose to move quick and steady instead of staying at a spot for too long, because the possibility of falling rocks and stones is existent. In fact, this was the major concern when I asked the train driver for advice on the hike. And the existence of the problem was proven to us when the way of the Odontotos was blocked by a rock that had to be removed by two employees from the railway company the time we rode the train up. So no joking around in potentially dangerous spots or passages. We took our short breaks in the safety of the tunnels or in open passages. The third thing to watch out for at this adventure are the bridges and how to cross them. The bridges can be dangerous.

There is no safety for hikers because they were not intended for them to hike on. They are rusty, old and falling would mean certain death. But they do hold the train, of course, so once you have figured out the stable parts of the bridge crossing becomes easy. It’s nothing I would recommend children, or elderly people to do, so don´t think that´s a trip you can do with young children, but if I knew my children are disciplined and can follow my lead I´d take them (probably 14 years and up). When crossing the bridges I chose to do it on the steel beams. Not on the thin layer of rusting metal to the sides, that give you the wrong impression of safety just because you can´t see the drop. Neither on the wooden parts floating in mid air hat are suspended in the middle. Crossing on the steel beams and holding onto the guard rail with the hands is quite safe if you are not stupid. And if you don´t lose respect or become ignorant of the potential danger after crossing 20 of these bridges you will be fine. The hike is by the way quite tiring for the feet as the ground is 90% mid sized rocks and pebbles. Your only relief is walking on the wooden parts of the flat parts of the railway tracks and making awkwardly small steps for kilometers or actually balancing on the rail as we did a few times.

If you got a day and want to spend it on an adventure in the mountains of Greece, Diakofto – Kalavryta is the place to be. If you can handle the bridges and the train schedule you are good to go 🙂 The hike itself is not (yet) illegal, you can even find it in some travel guides and you can ask about it at the train station of Diakofto.

More information on the Odontotos train can be found at:

And if you want to see great art from my fellow travel partner check out: 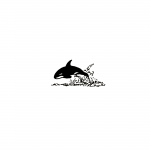