Simone Bicorgna is an italian practicioner who, after the events of the AOM 2019 in Matera released a statement openly discussing issues with the events surrounding the AOM that day. For Simone the AOM has raised questions on respecting spaces and on the ethics behind events like these. But it is not just Simones personal opinion. The AOM has caused an outcry from Matera locals and italian newspapers openly doubting the ethics of parkour/freerunning itself. Reason enough to take the initiative and ask Simone on his thoughts on it all.

At the end you will find many links to the articles, the actual AOM live stream, Storror and Storm coverage and other material related to the AOM in Matera. 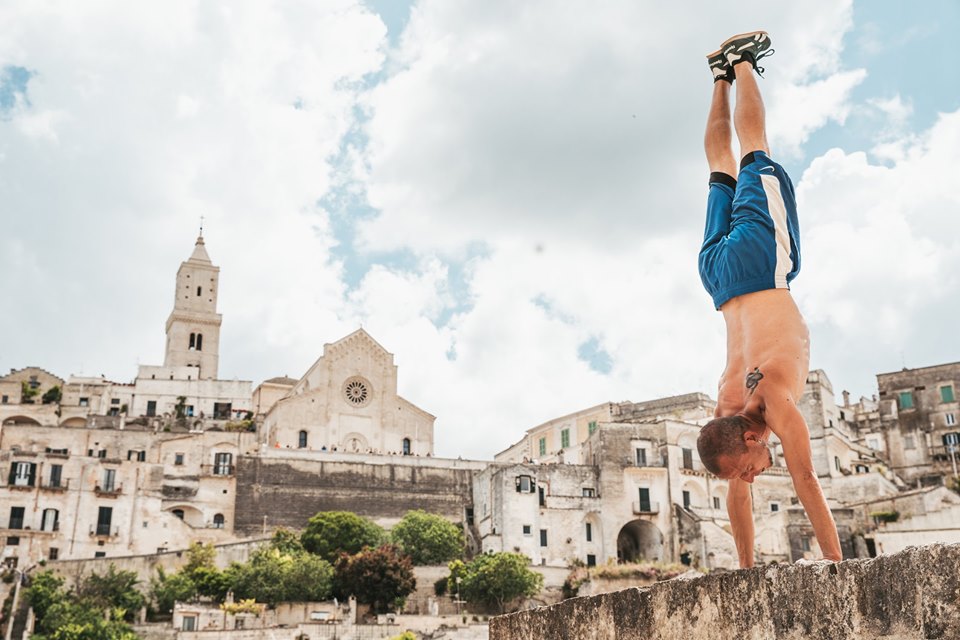 Hi Simone. You recently released a statement (LINK!) in which you openly discussed your opinion on the Red Bull Art of Motion (AOM) that happened on October 5th in Matera Italy. Before diving into that:

I’m the director/president of ADD Academy Umbria, the first italian Art du Déplacement Academy directly recognized by the Yamakasi founders, that we opened in Italy in 2014. But first I’m a practictioner of Art Du Déplacement, I started to train in 2007 like many others, after many views of some parkour videos on youtube. Then in 2009 I met Laurent Piemontesi and after Chau Belle, Williams Belle and Yann Hnautra and I started training Art du Déplacement. I live in Terni, a small town in the centre of Italy, in the region Umbria, and I’m a full time coach in my association.

I was involved in a big project that ended in june 2019 in Matera and for this reason I have some good links, some friendships there, that is 500 km away from my place. I know the guys that live and train there, we worked together to make a big show and an International workshop supported by Fondazione Matera European Capital of Culture 2019.

I noticed from the news that many accidents and disruption happened in Matera before, during and after the AOM, like damages to the Unesco heritage, and conflicts with the population, so I openly put the attention on it, because I think the most important values in the practice of ADD/parkour/freerunning are RESPECT and RESPONSABILITY. In my text I asked the readers some questions about that event: will there be any positive outputs for the local community? Which consequences for the town? Which for the RedBull brand? Who is going to pay for the damages? And, in the end, which kind of values are inspired by such events?

No, I was not there, but I saw it on streaming.

I don’t like competitions but this is not the point. The main problem, as I see it, is the negative impact, caused by the event, on the inhabitants, and of course on the historical site. Matera is fragile and has to be protected. The organization of AOM didn’t pay any attention to that, but only on the show.

a) What is the feedback from any officials and/or authorities? -> city administration for example

They didn’t say anything

b) What is the feedback from people living in Matera? How did they perceive the event.

I understood there is some disappointment, someone wrote about perceiving a sort of invasion by the freerunners, people jumping on the roofs of the houses at every hour for the whole weekend, annoying the owners of the houses, causing damages to walls and roofs and things like this. There were many calls to the police in those days by many inhabitants, and a journalist was beaten by a group of young freerunners because she was filming them while jumping on the roofs. I can’t say if in general people from Matera are happy about the AOM, but for sure someone is not. Recently the ADD/Parkour association of Matera “Muvt” realased a statement about that.

c) What was the feedback from the spectators from the event? Did they like the AOM?

I think that people who like AOM and went there to see the show, they liked it.

d) What is the feedback from the parkour communities who travelled to the event to see it live? (Have you heard anything?)

Same as before, I think the AOM has its audience, and these people love it, of course.

e) What is the feedback from the participating athletes? (Storror for example released a video -> LINK).

I don’t really much care about their opinion about that because, in some ways, they are part of the same business. Unfortunately Storror are already responsible for a sad accident that happened in Rome last year, filming themselves jumping on a police car. Because of that no one is anymore allowed to train where it happened and the local parkour associations had serious problems with their work on that area. Storror didn’t pay any consequences or apologize either.

I don’t really think that places like Santorini or Matera need any help from the parkour community in order to grow their tourism; what I mean is that we are talking about people (ADD/parkour/freerunning practitioners) who, usually, don’t spend so much money while travelling, to let me think about them as an economic benefit for the city; in the particular case of Matera, they can cost a lot instead, causing damages to the ancient sites and roofs of the town.

I saw from facebook several walls cracked down and many damages on the roofs, so many that the President of “Fondazione Sassi” (the institution who works to promote and preserve the Unesco heritage in Matera) released an official disapproval statement that echoed through local and national newspapers.

a) Who do you think is to be held responsible for these damages?

First the Red Bull company that benefits from the event, then the ones who directly damaged the stuff, but also the Municipality for giving the authorization for the event.

b) What could have been done to avoid the damage?

I sincerely think Matera is not the place where an event like the AOM can be made without bad consequences, Matera is not Santorini, it is very old and fragile. Anyway the organization did not involved people from the town, or give any advice to the guys, there was not any security service. They came and went back home taking what they wanted, leaving damages.

Yes, of course. We did an amazing job in june working with Fondazione Matera European Capital of Culture 2019, but now I feel people in general will not understand the difference, also the municipality could ban future events.

For sure AOM it’s not promoting parkour, but parkour based competitions instead, that is very different.  I really can’t say if some people heard for the first time about parkour thanks to the AOM in Matera, probably it happened, but I think the great majority of the people who heard about this (understanding what parkour really is) already knew parkour. The real aim of Red Bull is promoting the energy drink in all the action sports and extreme sports in order to reach all the different markets. The marketing strategy is easy and probably the best in the world actually: to persuade all kind of people (mostly the youngers) to buy the Red Bull energy drink, because it helps you to overcome your limits and reach your goals. In order to achieve this goal, Red Bull has occupied every kind of sport, sponsoring (and owning) athletes, teams and of course events. Red Bull founder Dietrich Mateschitz said: “We don’t bring the product to the consumer, we bring consumers to the product.” They associate the energy drink to the best athletes and the most extreme and spectacular sports to spread the energy drink to all the audiences who like these sports. Of course the athletes involved in the Red Bull Circus gain in terms of popularity and fame mostly inside the community, but I don’t think it helps so much to spread the parkour outside the community. Maybe I’m wrong, but that’s my opinion.

I think Red Bull can easily pay for the damages and apologize for what occurred. I’m not against events like that, but what about ethics and responsibility? It seems to me that many teams and events are pushing on the marketing strategy to appear as outlaw, over any rules, spreading the message to the younger generations that they can do whatever they want and that it is just fun (escaping from police, invading private property, pushing the adrenaline on the maximum to reach the podium, the likes, the success). I want to say that this is all fake and very risky. The original spirit of the founders/pioneers is very different instead: intimate, respectful and responsible, very linked to the habitat and to the people and yet powerfully revolutionary. The new generations should have the opportunity to know and understand this primarily and fundamental approach based on positive values. Keep your Ego aside, put community first.

We don’t need to build anything fake to move freely, and I also think there is no evolution in the practice of parkour/freerun through competitions, because competitions and competitors are the orthodoxy in sport, it is a very conservative way to look on the physical activity, so, in my opinion, they are not pushing forward, but backward the movement, building themselves their own cage, with the audience screaming out to see them pushing over the limits like any other sport. And what happen if  anyone injuries oneself? They just cut him/her off from the competition and pick someone else up to occupy the empty seat, the show must go on. I still think the best and real competition is with yourself, with your own limits and fears, not with others.

Thanks a lot for sharing your thoughts on this!

To finish this up here are some useful links if you want to know more:

Newspaper article on the AOM in the local Matera newspaper – LINK

Newspaper article 2 on the AOM – LINK

Neswspaper article 3 on the AOM – LINK