The following blog post is a republish from my experience in London where I did a 6 month intership for Parkour Generations. The experience shaped me, changed me and also changed my approach to parkour. It was written in german as at that time I was not aware I had international readers. This 5 part series of blog posts includes info on my everydaylife with PKGen, how I lost nearly 8kg in 4months, went from 0 muscle ups to 4 consecutive, how I did my frist ring muscle up, how I partcipated in the first ever Night Mission (which I took to Austria after), how I got ADAPT qualified (bringing ADAPT to Austria later on), how I spent hours and hours helping bringing the Chainstore (that became my office) to life with the team and many other great experiences. For the german (and original) version of this post – click HERE. 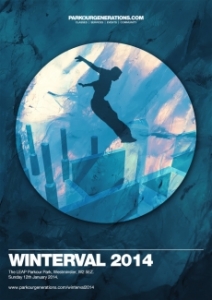 During my stay here in London some smaller and bigger things will happen and have already happened. Winterval 2014 definitely was one of the bigger happenings (the announcement of the Chainstore another one for example) and I was lucky to be a part of it. The following Blog post will be about my experiences and views on Winterval as well as some detailed descriptions of my A.D.A.P.T. lvl 1 hours and sessions during this event. As I was assisting one of 5 coaching teams at the seminar the Blog post will feature an inside view rather than a participants perspective.

First things first. I am writing in English because a friendly encounter at Winterval made me realise that the Blog is being read by a broader audience than I thought. So instead of letting people depend on Google translate I might as well write in English. Excuse my mistakes or any weird expressions though!

After waking up at 05:20 and a misjudged travel to the LEAP park I started Winterval at 08:30 by helping registering the ~100 participants that were expected to come this sunny but fresh Sunday morning. After that I headed to find Flynn and James as I was scheduled to be their assistant for the sessions. 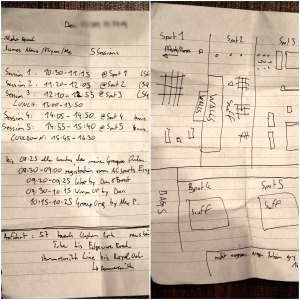 A few words on the organisation of the event: I was impressed by how detailed everything was planned through. From dividing the area that is LEAP into several zones, to the rotation system, to dividing the participants into groups, to assigning student group leaders who would bring students to the right areas and coaching groups at the right time, to flexible people who would “float” around the areas and be ready when they were needed to every last detail. Weeks before the actual event the plan was already developed and the roles for each person that day clearly assigned. The picture above shows my notes for that day and if someone found me peeking at my sheet of paper at some point it was because I was keeping track of where to go next and what the time schedule was saying.  With 5 main coaching teams each including 2 (at least) A.D.A.P.T. level 2 certified coaches and sometimes an additional A.D.A.P.T. lvl 1 assistant (like me) Parkour Generations was drawing on a very skilled group of people executing an event like that.

At session we took one of the (3) beginner groups through an underbar movement route. It was nice seeing the guys work their way through the course and I was glad being able to provide some advice. It was also great to see Flynn in coaching-action and the cues he was giving on technique. 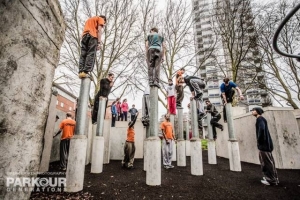 The second session was spent in an area with 3 medium high poles and a set of walls stretching out for about 20 metres. This time we guided an intermediate group towards making their way through the set of walls in a fluent yet challenging way though starting the route with a climb on one of the 3 poles ending in the position of standing straight. Climbing down the pole was followed by a cat leap (Armsprung) which would make the entrance to the walls. One participant had a hard time standing straight on the walls because (and I could relate, because LEAP walls are tiny and quite high right on). I found him several times giving up the challenge and dropping down from the walls but was lucky to be able to guide him to the far end by suggesting different ways of moving. I tried to avoid queuing by challenging other participants to circle us thus finding alternate routes through the wall jungle.

The next session was done with advanced practicioners. The challenge consisted of a set of 45 repetitions of the same route in 45 minutes going up and down each obstacle in that specific training area. My job would be to keep the guys motivated and keep them moving but as I knew some of them personally as well as some of them having a higher level of Parkour than me I found it quite hard to approach them. Also the challenge as it was originally suggested was impossible to achieve. I basically just joined in and tried my best to do the route as fast as possible making it 1:21 min on my stopwatch for a single repetition. 45:45 was not possible. We downscaled the reps but introduced a 180 cat to cat, it was hard, and it was fun. LUNCH BREAK!

I met Flynn to make a plan for the last 2 sessions. We played around with the bar setup on one of the training areas and I introduced the idea of switching places on a rail as a matter of challenging the next (beginner) group. After a few minutes Flynn introduced me to HIS technique of switching places. Quite a challenge! Out of the 20-30 tries we gave it only 1 worked out as planned. The only proof we needed!

We found ourselves with the second intermediate group at the 5th training zone which consisted of a big scaffolding close to a wall. Ideally for lache to catleaps. Flynnwas giving spot on advice and I could take away alot myself during this session. 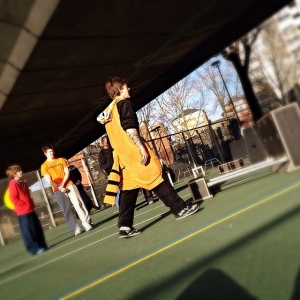 I want to thank Parkour Generations for including me. It was my first time coaching in such an event and I am very grateful for the opportunity I was given. Thank you as well to James and especially Flynn from my coaching team. I know you guys don´t really need assistants so thank you for including me. Oh and an honourable mention goes to Alex who coached Winterval in a Panda costume!