The following blog post is a republish from my experience in London where I did a 6 month intership for Parkour Generations. The experience shaped me, changed me and also changed my approach to parkour. It was written in german as at that time I was not aware I had international readers. This 5 part series of blog posts includes info on my everydaylife with PKGen, how I lost nearly 8kg in 4months, went from 0 muscle ups to 4 consecutive, how I did my frist ring muscle up, how I partcipated in the first ever Night Mission (which I took to Austria after), how I got ADAPT qualified (bringing ADAPT to Austria later on), how I spent hours and hours helping bringing the Chainstore (that became my office) to life with the team and many other great experiences. For the german (and original) version of this post – click HERE.

As far as the work at PKGen is concerned, I can’t report as detailed as I would like at the moment, as I have to wait until the news about some of the projects is published via the official PKGen channels (Edit 2019: the Chainstore is just being completed e.g.:).

Anyway, one of the tasks brought some of the know-how I gained during my studies into the game. Together with Naomi I was allowed to design a feedback questionnaire for the Parkour Generations Class visitors, put it online and evaluate it. The results will be used to help reduce fear in parkour newcomers and thus attract more people into the classes.

Another project revolves around PKGens performance. Without going into too much detail I can say that this will probably be the hardest task, but it gives me the opportunity to be part of it from the research phase to the realization and I can make an essential contribution to the success of the company.

(Edit 2019 – it was about creating a connection between the PKGen performance team and sports agencies. The ultimate aim was to get agencies to sign athletes – Funfact – Storror, Storm and 3Run were/are still managed by such agencies in part: For example, JLM Urban Sports Management has specialized in Parkour athletes including Storm Freerun, Sports Promotions list Chase Armitage in their portfolio, Storror are linked to Studio71 UK according to their website).

Besides the expansion of the services on corporate level (i.e. focused on companies) there is still a lot for me to do and so I hope to be able to go into more detail in one of the next blog entries.

But let’s face it, my everyday life is anything but usual and so it can happen once in a while that I wait at 9 o’clock in the morning for a delivery of 350 kilo tractor tires that somehow have to be hoisted into the building.

There is also a lot going on in terms of training. Because I have regular access to a nice indoor scaffold I had the chance to train a lot with rails. Only recently, for example, for the first time in my life I was able to make a lache to precision jump on a rail at small height. A set-up you hardly ever find outside. My biggest fear was to misjudge the distance to the rail, because you are almost blind due to the lache.

So there were 3 options a) to swing much too far, land on my heels and slip disgustingly b) undershooting and to familiarize the shins and stomach area with the rail or c) a usable landing. A and B were rather bad options. C rather unlikely right away, especially the hard ground made it difficult for me to just go for it. We had blue crash pads, but I didn’t want to use them too extensively. But I couldn’t do without it.  After two attempts I got the hang of it. Hip position, upper body position , landing area, it all checked out. Now geting rid of the crash mats. My first lache to precision jump on bars was born. 2 days later I came back to the scaffold and fear crept in me again. Reason enough to work an hour on one and the swing until it was almost possible without thinking. 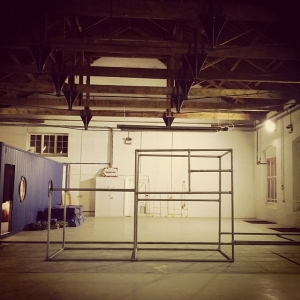 Besides this very technical problem I work every day on my full squat. Anyone who knows me will know that I am not able to make a whole knee bend without taking my heels off the ground. Stretching exercises before going to bed are supposed to counteract the whole thing, although I have now accumulated a small arsenal of exercises to help me with this problem as well as my back problem. (Update 2019: Back pain is under control for years now, full squat not even close yet, but I stopped working on it until recently)

A good training experience was the Parkour Generations team training day. It was a day where many of the PKGen people came together to train together. Forrest led a warm-up that consisted of a cycle of 12 exercises that were repeated 2 times and actually came from sprint performance training. Coordinatively quite demanding and definitely interesting. The “warm-up” lasted more than an hour and was an experience in itself. Afterwards free training, where I took the chance to talk to Blane about the full-squat problem. 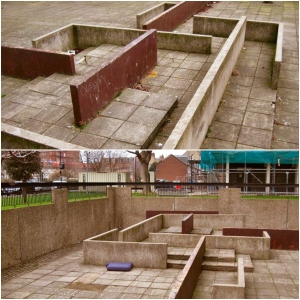 Finally, a few anecdotes. Recently I was training with Flynn in Vauxhall. Since 2009 I wasn’t there anymore and at that time we were only a few minutes at the spot before we were “robbed”. Since then it was the first time Vauxhall for me. Training there was very good, there are many challenges. For example a precision from a high wall on a branch of a tree in approx. 4-5 meters height. After Vauxhall we headed towards Waterloo to train next to the Thames at a quiet spot. Flynn had shown me the way to 2 canopies from where I could jump different (for me) demanding pole precision and plyos. How difficult a simple plyo becomes a precision jump when it goes down a few meters behind it. Anyway. The real challenge was a 180 catleap (arm jump position, pull up, push away from the wall, turn 180° and land on a metal grid). The first repetition had an ugly landing. And at the second attempt I somehow slipped stupidly, fell down 1 meter, supported myself with my hand, which also slipped away. Why did the hand slip away? Because I fell into a pile of dog shit. Fortunately nothing on the clothes and fortunately a gas station to wash nearby. After that I was a little afraid to try it again, but Flynn gave me the necessary courage with a few words and after a short break the 3rd attempt was quite easy, and clean (literally). After that we went to the Imax Spots where we happened to meet Kie Willis (that´s London!). 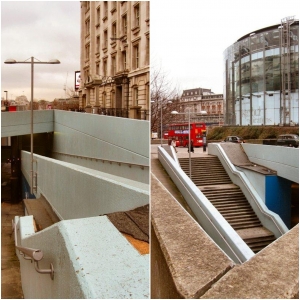 What I noticed in London and what seems to be a peculiarity of the London traceurs is that “There is no trying, do it! mentality. With several people I noticed an attitude where the piece by piece approach to more difficult jumps is avoided, instead they give 100% right on and they are very successful with it. I suppose it is due to the simple fact that at many of the London spots an attempt is not possible. Imax, for example. On the videos Imax (the blue walls) always looks very idyllic. A small spot in London where people regularly push themselves to peak performance and which is supported by an atmosphere of indoor training due to the security the videos convey. But for me Imax is one of the most respectable spots in the world. The smallest precision jump there is is just under my maximum. In general, almost everything takes place at height and anyone who knows Kie´s video from 2013 knows what is possible there. The things he does at Imax are surreal when you stand in front of it. Or the Stride of Phil Doyle with Livewire back then. Pretty absurd stuff but those are the mad things. Nevertheless… I personally can’t relate much to the spot, a reason to train there more often? (Update 2019: but then I didn’t 🙂 )

So much for the last few weeks. I won’t be able to write about my work experience in more detail until the near future. By the way, 12 January is Winterval. A full-day seminar limited to 100 participants with the whole Parkourgenerations team and Johann Vigroux as a sepcial guest. In the next blog entry I will certainly dedicate a few lines to the seminar.