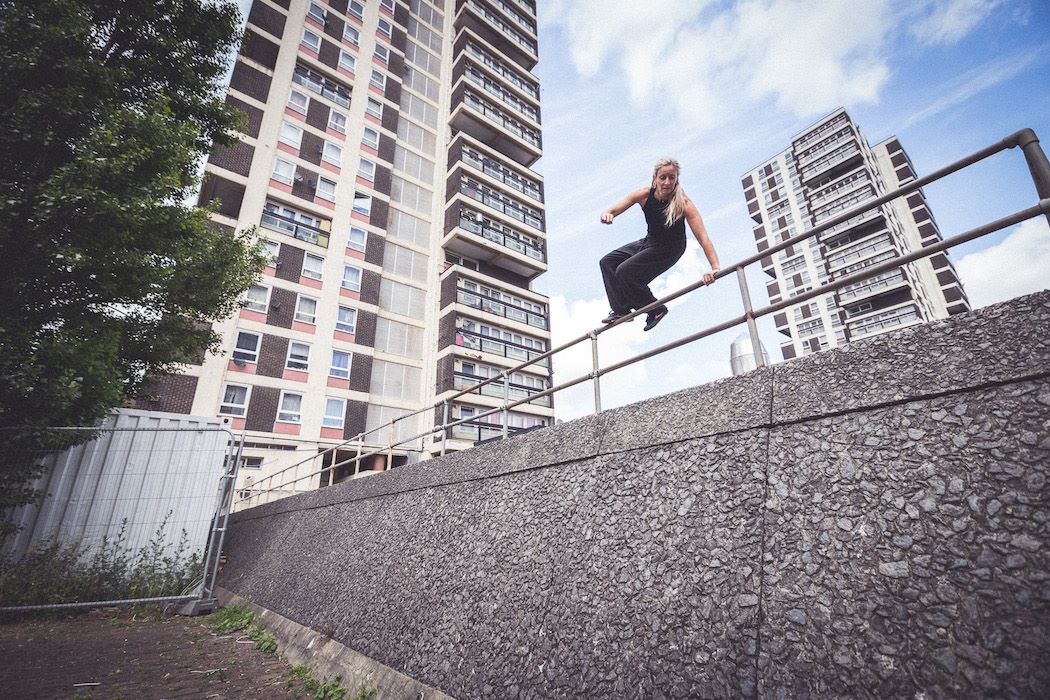 Julie Angel dived into the world of Parkour around 2003/04. She contributed greatly to a very rooted and real picture of Parkour through her short films, documentaries and portraits. Julie somehow manages to capture the spirit of Parkour on video without solely relying on the spectacle aspect of the discipline. Through her videomaking and her own practice she inspires people of all ages and abilities. In 2011 Julie released Ciné Parkour, the first ever academic work on PhD level on Parkour. At the same time Ciné Parkour, for the first time, provided a written and scientific base for the history and development of PK. 2016 saw the release of Julie´s “Breaking the Jump“, a book filled with incredibly detailed stories of the founders of the discipline along a structured timeline of the events and the history of Parkour. Below you will find the interview. The questions were developed with strong input from the community. 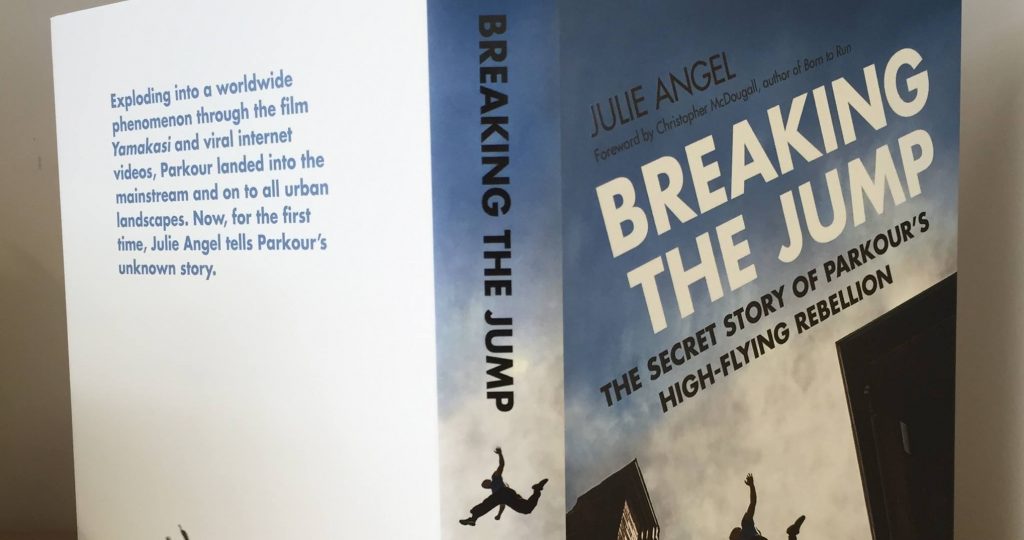 Julie: For me it’s a mixture of things both physically and mentally – a way of facilitating change, a mindset of embracing challenges, and a way of experiencing environments as more than they first appear.

Julie: I love the work Charlotte Blake is doing on Parkour and mental health – see this blog for more info on that. I also think longevity is an important issue that I’d like to see more projects focus on. Even though Parkour is still such a young discipline I think this matters. And public space, there’s so much to research! I’m a big fan of public space and there’s not so much left these days but it’s not clearly sign-posted so it’s a sort of stealth issue in that spaces that may appear as ‘public’ (ones where you can sit down and eat a sandwich on your lunch break etc.) but are in fact private and highly regulated. Bradley Garret is doing some great work on this at the moment.

Julie: Not really, I understand and also appreciate the will of people to share their achievements and the role it plays in inspiring others. It’s also easier to film the action than communicate something a bit more ambiguous or meaningful. Society loves a spectacle and Parkour can be a beautiful one so it’s great to celebrate that but yes a bit more balance would help those who are trying to communicate a broader message and especially those who focus on the educational potential for Parkour across a diverse range of ages and abilities. I think more filmmakers could do work on the other aspects of Parkour beyond the action but given the choice, if someone is only going to make 1 project about Parkour then most will go for action, but that’s not to say that more meaning can’t be communicated at the same time, it just depends on your filmmaking craft, experience and motivation. 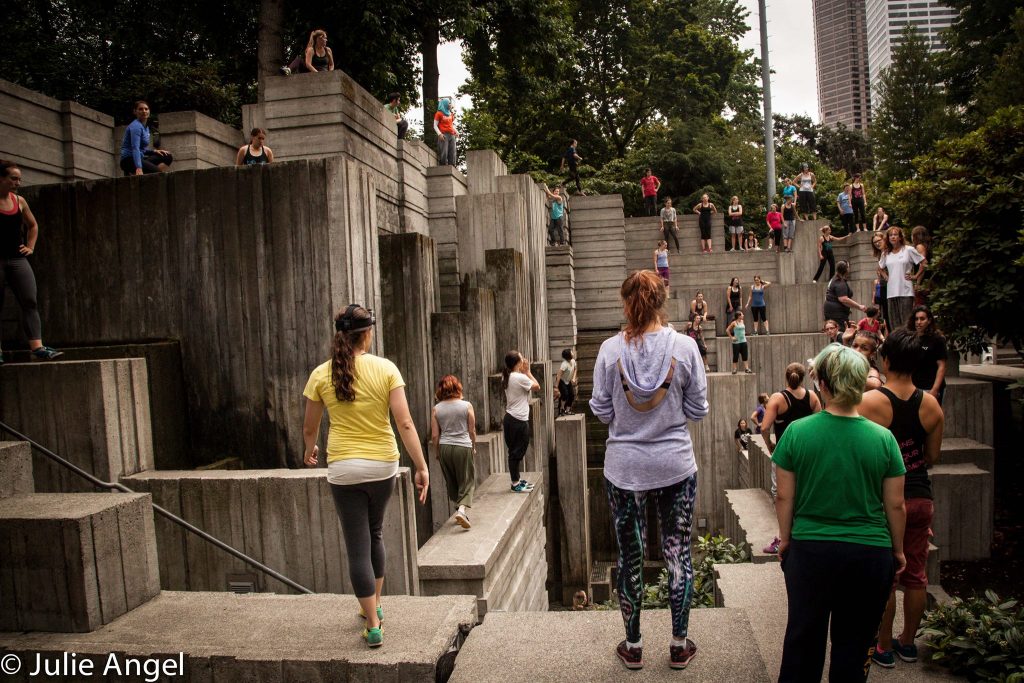 Julie:  It’s a mixed bag, in some locations the sportification and creation of certifications and regulated training has helped break down the barriers to participation for many. I wouldn’t have started training without there being a ‘proper class’ and trusting the coach. There’s also a big difference between someone being good at Parkour themselves and having the progressions and wider knowledge to coach and introduce it to someone of a very different background and level of physical competence than they themselves had when they started. As far as I know, the places where there are larger female participation are ones where there is a solid coaching community. People need to feel that they are welcome and this is communicated in everything a group or community does. It could be the imagery they use in their ads or promos, the style of language they use and how they are perceived locally. It all forms an impression of whether someone thinks ‘oh that’s something that could be for me’. At the other extreme the free exploration has been lost sometimes and replaced with a bootcamp style of training, the ‘no pain no gain’ mentality which I don’t personally enjoy and don’t make any progressions with. Depends on how you see ‘sport’, and what level of standardisation is imposed. I think the word ‘sport’ currently has a very narrow meaning and it would be great if an activity like Parkour could help broaden that.

Julie: There are ethical businesses and there are opportunists and parasites. There are some great Parkour businesses out there that are community run, ethical, sustainable and profitable. These organisations have a high level of reflection on the question of ‘why’ they are doing what they do or offering X.Y,Z. They tend to take their time on projects but the results are ones of quality. For example, in Finland, if you are training to be a teacher for P.E. (physical education) or sports, every candidate will have had some Parkour training.  I also think there are Parkour businesses that are being run by people who know a lot about Parkour but not so much about running a business. People need to be open to learning more than just how to coach or perform Parkour. I know quite a few athletes who now have ‘Parkour office jobs’ and they can´t believe how much admin they have to do etc. but admit that they don’t have good efficient systems in place because maybe it’s the first time they’ve ever run a business. It’s like anything, there are always people you can ask for help, learn more about and have a different skillset. Nobody is good at everything. Every business makes choices around the values it wants to maintain and at what cost to their profit and sustainability. It comes down to informed choices basically.

Julie: Depends where but my guess is that on average it’s 10-30%. The places where I have seen growing female communities are ones where there is a solid coaching culture that has made a concerted effort to make women feel welcome. By advertising something as ‘for everyone’ is quite meaningless when you look at the wider culture of who does activities that are perceived as ‘risky’, need acts of courage and are potentially physically demanding. In general people wont think ‘oh well I bet there’s loads of women training of all ages’, they are more likely to think, ‘there are probably a lot of young athletic guys’. It takes a more specific approach to make those outside of the major demographic feel welcome at an event/class/jam. I think there’s more awareness of what needs to be done if people are interested in having more female participation. I think it’s really positive that people are asking the questions now of ‘well if it’s for everyone where is everyone? Where are the women, older participants, less able’ etc. 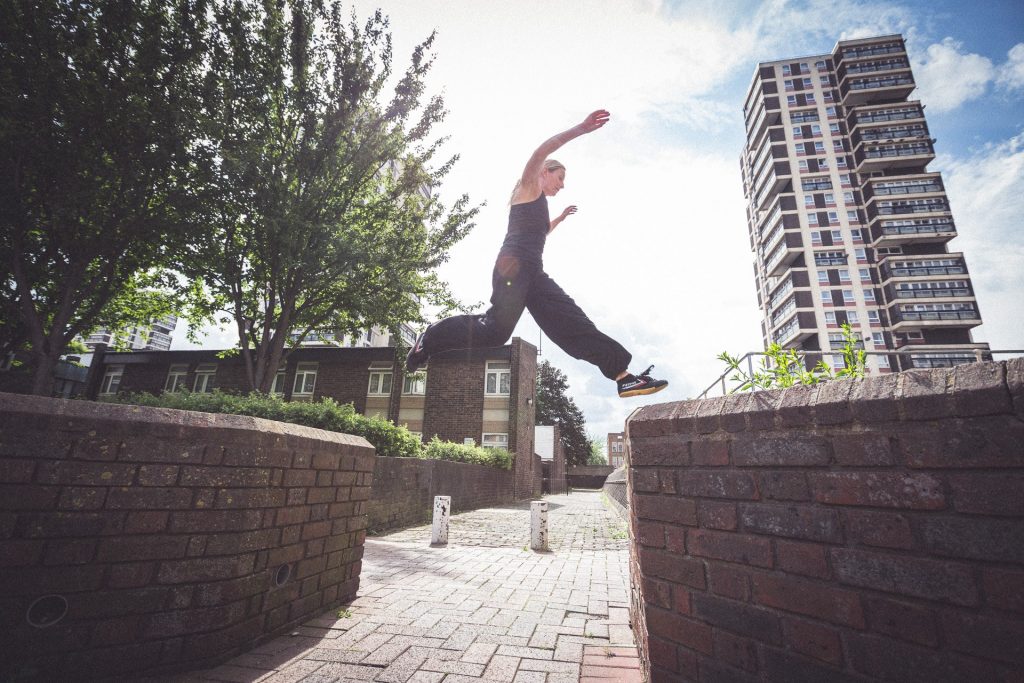 Julie: Apart from the book no, and that was self-imposed. When doing my PhD  Iwas very lucky in that aspect compared to some other Parkour researchers I know. When I started training it was clear that I hadn’t moved for a very long time so there was no expectation for me to perform or be able to do anything. I spent years just doing step vaults and that was fine. I turned up and tried and was humble to the process so there was a mutual respect between those who I filmed and when I was a student at one of their classes. When filming and interviewing I have a very informal way of being and a very typical British self deprecating sense of humor so no big ego which meant that nobody ever knew if I was going to make anything that was any good or not. I quite often get told ‘oh wow, I thought it would be ok but I didn’t think it would be that good’. I take my work seriously but I’m not a very serious person if you know what I mean. However, with the book I felt an incredible sense of responsibility as people were sharing so much of their personal stories for which I am incredibly grateful. I was constantly humbled and amazed at how much people shared. I’m quite a private person and I can’t imagine how weird it is for those individuals to read about their lives.  I took that responsibility very seriously. 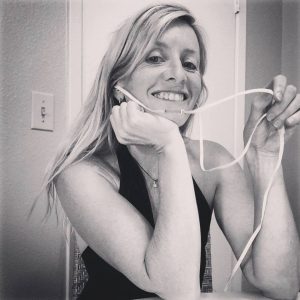 Julie: There’s more but not another book. There are some chapters that I decided not to put in the book but I’d still like to share. I’m going to release those soon. If I put everything I wanted in the book I would never have finished it so there’s still more that will come out in the form of blogs etc. I just need to get back into a writing mindset again.

Julie: As part of See&Do I’m working with several very inspiring coaches towards developing on a series of online courses: Strong Body Strong Mind, that involves a combination of functional natural movements, neural linguistic programming and self-defence strategies for women. It’s how to be healthy, happy and safe. Train your body, your mind and connect the two. I’m really excited about this and doing a lot of research.  If all goes well this should be ready early next year.

Julie: Keep moving, stay strong and be brave. And thanks for the questions 🙂

More Ressources and Infos can be found on: