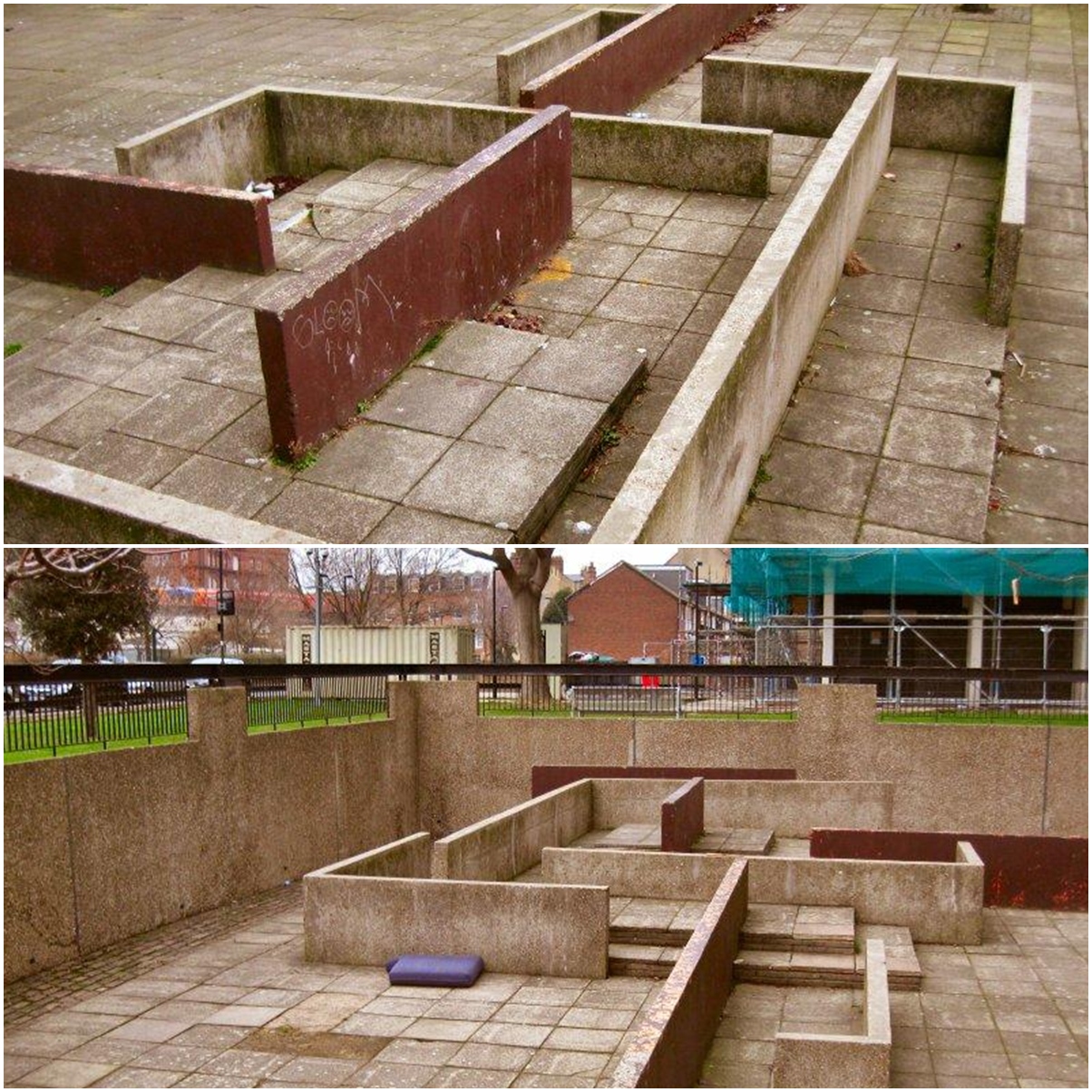 It was February 2009 (I was 22) and a training colleague of mine and me decided to go for a parkour trip to London. We met Cable and Blake from the Saiyans earlier in 2008 when they came to Austria for the Playstation workshops and they were so kind as to host us during our stay.

From one of the early videos I knew that there was this awesome place somewhere in London with all these little walls but I did not know where it was or how to get there (Vauxhall). One day I expressed my wish to go there and asked Cable and Blake if they knew where it was. They both said “no” but knew someone who could tell us how to get there.

On that day my colleague and me left Edgware (where we were based) early to get to Canada Water Decathlon to stock up on as many pairs of Kalenji Success as we could afford / carry as there was no Decathlon in Austria. After that we were to meet Cable and Blake at a tube station somewhere to find the spot. Blake used a navigation system on his PSP to guide us to the spot (Vauxhall Walls).

From that moment on something happened. After a few minutes into navigating through the district we heard someone shouting (at us) from behind us. Like “owweeehh, braaaap braaap”. I was instantly intimidated, Cable told us not to turn around, just keep walking and eventually they´ll lose interest. Well I already turned around. 4 of them. 4 of us. We continued walking when in the distance I saw some people jumping around in what seemed to be the spot that I knew.

I said to the guys “That´s it!” and pointed my finger. We made it to the group and I felt safe. After all we were 11 now. 7 guys training at Vauxhall already, amongst them Teige, Bobby, Elliot,Kristian and some I did not know. Teige was with his HUGE backpack, I remember him telling us he is going for a trip later.

I put my stuff in the corner with the others and started warm up and happily jumping around. What I did not notice is the big crowd of sketchy looking people gathering at the entrance to the spot (thus blocking our way). When I realized I saw around 20-30 guys in that group.

I realized something was wrong way too late. A guy from the group, probably the youngest of them came down to us asking anyone at random “got a pound or a smoke?”. No one really replied so he became a little more aggressive (verbally). I still thought everything was cool, just some idiot being idiotic, like so many people in London are, and continued training.

Blake eventually approached him. Seemed everything was cool. At some point Blake offered the guy 5 pounds to let us be as we just wanted to jump around. The guy took it (grabbed it…) and continued asking for “a pound or a smoke”. At this point he was not alone anymore. 2 or 3 other guys got involved now.

Ok and now it gets dizzy…

While some of our group smelled something and started ascending the walls, the aggressors were in an argument with Elliot. They tried to grab his backpack from him but he refused. They hit him. He eventually managed to climb the wall and was chased by a few of these dorks.

Pretty much at the same time I was doing something stupid. As I thought Blake knew what he was doing I got my wallet. I thought I could buy us out of the situation when I offered the guys “all the money I had with me” in exchange for us training there. (I still wanted to train, it was one chance only to do this, I came all the way from Austria man 🙁 ). The thing was, because of my earlier Decathlon visit mixed with stuidity I had around 85 pounds stashed in my wallet. The 5 pounds were easily accessible (where you keep papermoney). The rest was hidden in some smaller pockets, I thought well he´ll see the 5er and gets on with his life.

Sadly that´s not what happened. Once they realised I really was THAT stupid to put out my wallet, they surrounded me. They pulled my hat over my eyes so as not to be able to see their faces (well done) and when I opened the wallet they just snapped it and started running. Cable shouted to them to AT LEAST drop everything they don´t need. And indeed.

I was following the trail of shame through Vauxhall Walls, picking up my driving license, my social security card, membership cards, anything really….except the picture of my (ex) girlfriend (bastards!).

When I was finished we were alone, the gang had left us. A few minutes after that the police arrived. We explained. They took us into the cars (I was in a BMW) and then we raced through Vauxhall with at least 80-90kilometers per hour stopping at every black man/child where they asked me if it was him. I declined. After that we were driven to a public place somewhere in the area and woven good bye.

What happened to Elliot? Where are the others? What the fuck just happened?

We decided to go to the thames and eventually found some of the guys at this huge playground near the London eye. Elliot was fine.

Effectively, what they got was 80 pounds and my dignity. What they created was a traumatized Alex and a legend amongst London parkour practitioners. (btw. my training group got robbed and threatened at gun point next year in Athens…bummer)

Some thoughts that were going through my mind the next years were: How was I that naive and stupid? Did they have guns? (One of them was shouting “Have you ever been shot?” while everything took place). Why was I so idiotic to take so much stuff with me in London, in an area I did not know. And many more…

But to finish it off with a good vibe: I was in London during my internship for PKGen. I also trained at Vauxhall numerous times after that, I was also teaching a children’s class on my own at the Vauxhall walls and of course RDVX was there. Whenever I think of the spot I think of something that made me stronger, as a whole 🙂