I´ll make day3 of RDVX less detailed and instead just highlight some of the things that remained vivid in my mind.

First off. I was dead tired and in pain in the morning of day 3. Putting on my socks was challenge nr. 1. but the weather was sunny  and we were motivated. We were heading for the Olympic Village where for the first time an official permission for a Parkour related group was given by the authorities to train there.

One of the sessions was with Blane. He teamed us up in pairs and gave us a distance to cover. We would plyo over our partner who would be in push up position, drop down to the push up position ourselves and do 1 push up more than our partner did just the moment before us. When we finish our push ups our partner plyos over and drops down to do his set of push ups (one more than I did before). So if I´d start, I´d do 1,3,5,7….and so on. In the end (after the time frame of 40 minutes) I was up to 27 push ups but we had just about covered half of the distance Blane had set. Good challenge!

After 2 other strength related sessions we headed to the Chainstore for our last 3 sessions of RDVX. I was particulary impressed with Ben Sheffler from PKOne (Germany). He had some great input in terms of reaction-time related training. Again we were teamed up in pairs of 2. There was a route with a certain goal set. For example a wall run and a starting point a few meters away facing the wall with the back. We then gave some queues to our partners and they had to quickly adapt. For example which foot they´d have to use for the wallrun, which side the vault should be done with if there was something in the way, in what way to turn when they´d start running or simply blinding them, taking them somewhere in the space and then letting them adapt to what´s around them.

The other 2 sessions opposed to the first one with Ben were indoors. Pownall had set up about 15 different stations with the aim of massaging (deep tissue) and stretching us. If you want to know how to use an elastic band and a wooden stick to massage your calves to total relaxation including a horrendous amount of pain (just kidding), Alex is the man for you! Hector and Adam led the other Chainstore session that consisted of a variety of rolling challenges in different situations. Dive rolls across gaps. Rolls on thin walls and different obstacles. Dive rolls on concrete through a gap of rails. Good fun!

Again I got proven that just because I am tired, stiff from the day before or simply have the worst muscle ache ever, does not mean I can´t move. The right warm up and attitude can boost you!

The huge variety of movement in RDVX was great, so was the input from all the coaches that came from all over the world.

Just having experienced so many different Parkour styles and coaching methods is inspirational and showed me how limited my view was before and how important it is to get in exchange with other people. RDVX did just that for me.

Oh and just before I forget it. Congratulations to Forrest for knowing/learning each and every name of ALL the participants and coaches of RDVX. At the end of day 3 Forrest went through a crowd of about 150 people calling every one by their name, an amazing skill he had demonstrated the year before as it was told me.

THANKS to everyone who was part of it. To Hector for hosting us. To the English weather for being so nice these days. To the scandinavians for a relaxed and funny evening at the Canary Wharf burger place. It was a great experience and who knows, maybe see you all again at RDVXI!

P.S. This is the so called Grant curve as we named it. We had a slight jogg with Chris Grant who then came up with it and I feel obliged to share the knowledge. 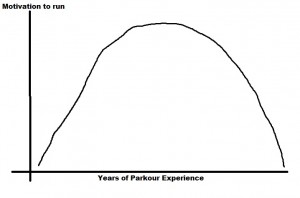 In the beginning of every traceurs life the motivation to run / jogg is growing. Up to a peak that is reached after a few years. From that point on it nears to zero again as the more experienced a traceur gets the more lazy he gets 😉