Below you will find an unpublished record of my experiences from the first PKGen Night Mission in London in 2014. After this experience and my return to Austria I had the pleasure of adapting the concept that eversince has positively changed my training approach.

In March 2014 I had the pleasure of attending the first official Parkour Generations Night Mission Challenge. The Night Mission derives from a way of training where practicioners train through the whole night, taking advantage of an empty city to explore and to challenge themselves all through a longer period of time. Especially the parkour founders used to regularly train like that where as my personal encounters with this sort of experience were very limited. I was told stories by PKGen members of some of the adventures they set out to so I was a bit worried of what would await me.

At the time I decided to go for the first Night Mission all I knew was that it will be hard, it will start at 21:00 and we will end by sunrise (6:00). I did not know of how it will be exactly or what I should be aware of.

The session was led by Dan and we were told to pack light. I needed to estimate how much water I would take and how much food, what clothing and so on and in the end I carried 2 litres of water, a cut up Mango, 2 sandwiches, some fruit and muesli bars, dried fruit and 3 sausages. (More than I needed but I was thinking that I would need a lot of energy) I had my rain suit with me as well just in case. After all it’s London and you never know. The day of the Night Mission I slept as much as I could and next thing I know is I am at the Chainstore being briefed on what’s going to happen this night.

The group for the night was consisting of Dan Edwardes who would lead the session. Then there was James from the PKG Team, Deepak, Thomas Couetdic and myself. When I found out Thomas will be attending I was quite happy as I wanted to meet him for a long time. As one of the first practitioners and well known amongst names like Stephane Vigroux and David Belle I also knew he was quite experienced in what was about to go down.

Every Night Mission has a theme or a topic. This first night mission, as Dan told us would be an endurance one. The second and the third one would be movie / series themed and would be totally different.

After the short briefing in the Chainstore we started. I will not go into detail that much as I think that a) you have to live the Night Mission yourself to understand it and to value it and b) because given the skill level, the experience of the group and depending who is leading it the Night Mission is totally different every time! Instead I would like to share a handful of my experiences that night and how it all affected me and my training.

At one point we were at an abandoned bridge. The bridge was closed but we found our way in. I was not too comfortable with height to be honest but for personal reasons and because I knew I could trust Dan and Thomas and after all my skills I was doing the challenges related to the bridge. First off was an easy climb to the top followed by crossing the bridge on the top steel made part. Although it was at height and it was dark it felt quite safe as we moved on a really wide section of the bridge. The other challenge was to get under the bridge and touch the pillars that the bridge was built on with our hands. We were doing that by climbing down to some wooden support structure and following it along to the pillars. The descending to the wooden structure was awful but Thomas was helping a lot by going first and guiding me through the grabs and steps I should make. At one point we were balancing on the wood, it was dark and all of a sudden a pigeon bursts off directly next to Thomas. Holy moly… Now I can understand Batman´s batphobia. Imagine being at height, under you the river. Silence…you are concentrated on every step you make and BAAAM, pigeon. 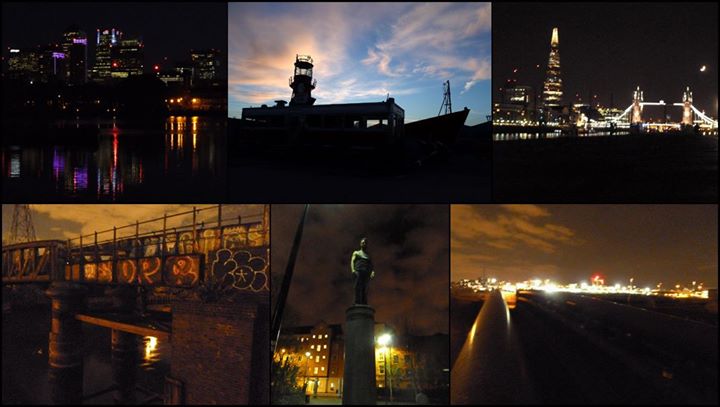 These are just some of the impressions we had. Lower left picture is the bridge I described. Pictures by Deepak. Thx for carrying the camera around that night. I know how any additional weight must have felt that night.

An other challenge was just beautiful. It was about 4 or 5 hours into the night (I think) and Dan lead us to this amazing spot right in the middle of London. Imagine trees everywhere, decorated with small blue LED lights. Like a light Forrest. In the middle was a small square where we decided to do the 15 minute push up challenge. Choose a number between 8 and 12 and rep out that many push ups every minute.

In between the various spots we were running (in the beginning) then walking mixed with running and then walking as James upset his ankle when he unwillingly dropped down from a hanging position at one of the strength challenges. He could have given up and maybe this would have been a wiser choice in terms of health but he was a true inspiration that night and he fought his way through! A great deal of our mission was urban navigation with input by Thomas who shared his experiences he gained in the military (map reading, compass reading and that stuff)

An other challenge that scared me in the beginning was balancing related. Even when the obstacle you balance on is thick and wide a height drop on both sides just gives me the chills. I originally thought of crawling along it on all fours but after repeating to myself that I indeed have a good balance and that the obstacle was way wider than my feet and that it should be childs play to walk over that I pulled myself together and went for it. And of course it went well. A few steps into it I realised how my fear had gotten the better of me and that battling it was the right thing to do. Generally this night, I battled a lot with my fear although I tried to not let the others in the group take any notice of that.

Throughout the night we covered a HUGE distance by foot. For all non-Londoners let me just give you some numbers later. We started in East London (East India) and went to Vauxhall and further. We then went to Cutty Sark via Elephant and Castle and then headed back to the Chainstore via Canary Wharf. About 15 kilometres I think?

The night was coming to an end and I have to say I was glad that we were walking a lot of the time and not doing any challenges in the end as I was exhausted and tired. My bag got quite light, that was something. We made it back to the HQ just right to see an amazing sunrise.

The whole night will stay in my memory for (probably) ever as it was an AMAZING experience that I can recommend to everyone. It might not be height that scares you, it might not be work at height at all that you will do during your night mission but if you are keen on working with what troubles you and what gives you a hard time then there is nothing better than the night mission to explore the ends of ones comfort zone.

I want to thank Dan and Thomas for the guidance, James for his unbreakable spirit and the pain he endured and Deepak for his friendliness, helpfulness and his positive mind. It was my pleasure being there with you guys!