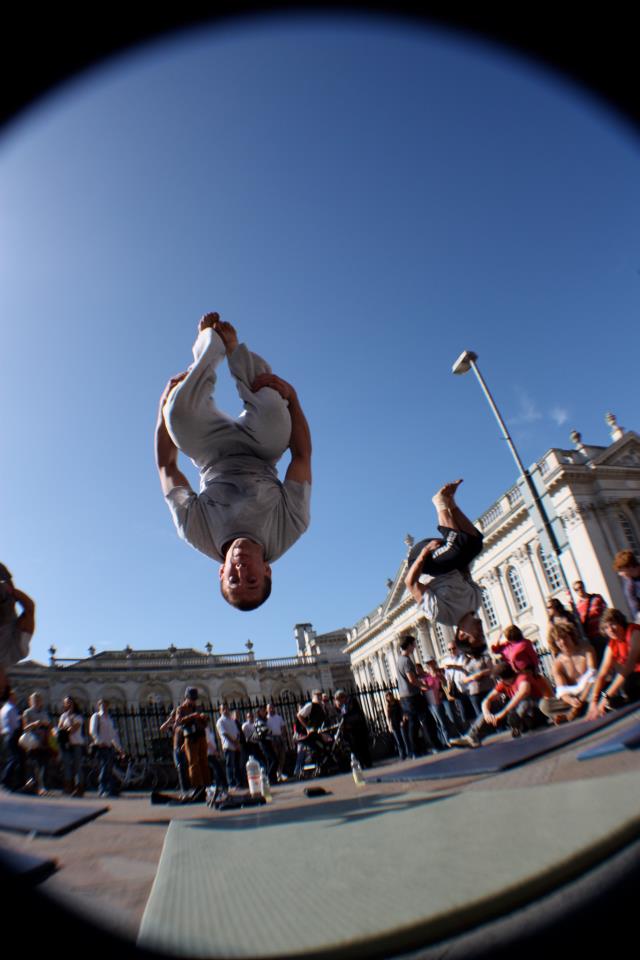 This interview is part of the archives. It was published on January 12th 2013 when I was doing an interview series for our PKLinz Blog.

Owen Covill is an english Tracer and has shaped the UK (and international) Parkoru scene. At the time I asked him for an interview he told me he is not actively training anymore a circumstance that makes the whole interview even more valuable. Hearing the thoughts of someone as rooted in the Parkour scene as Owen was, but who has taken the decision of stopping, is one of these rare opportunities.

Whoever remembers the old Cambridge videos might remember Owen moving alongside with Danny Ilabaca and Phil Doyle. Additionally Owen was a coach at the famous Playstation workshops that toured Germany and Austria.

Regarding the picture: Many years ago Owen, Danny, Phil and others did a charity event where they would do a certain amount of backflips in a certain time. The collected money would go to an organisation called New Foundations that would use it to support people in need in the Niger Delta. Overall the guys collected about 1000 pounds and did around 2000 backflips in 4 hours. You can see a video of the event here: https://www.youtube.com/watch?v=QgeEvR6EnxY

Alex: Hi Owen, thank you for the opportunity to interview you!

You started training very early in England thus you were able to observe the development of the scene there but also worldwide. You have mentioned that you have basically stopped training Parkour.

Do you still know whats going on in the scene?

Owen: I don’t think I do know what’s going on anymore, main reason for that is there is so much going on these days. Parkour has had a BOOM just as we expected. I still follow what I know though, I’ve tried to stay in contact with people and Danny and Chris even came to Cambridge and it was great to catch up. Phil (or little Phil, as I know him) he’s disappeared… busy always running off to different countries doing amazing things. (Hopefully he’ll see this and remember me, haha) Jin is back in Cambridge (from China) so it’s been great seeing him. Although due to my path being quite different to most people I know it does make things hard to stay in touch.

Alex: Did you make the decision of stopping Parkour or did it happen slowly?

Owen: I’ll be honest I never made a decision, it kind of just happened. I used to have conversation (a hell of a lot of conversations) with Jin where we discussed what we’d be doing in the future. We always said that we could never imagine doing anything else. For a very long time I think we believed that we wouldn’t do anything different. Always funny looking back on conversations of what we thought we would be doing.

What really did it for me (which is sad really) is money. I started working more often, and I decided I wanted to make something out of my life. I went from training Parkour every day (or every other) to working almost every day. My training slowly became less because of this. And then I met future Mrs Covill, and time continue to detract from Parkour. I could feel my body not coping with what I wanted to do so I slowly stopped doing as much as I did.

Alex: Could you tell us what you think the reasons of stopping are/were? ( Loss of motivation? )

Owen: I had Parkour friends like Danny who would try to encourage me to get more involved with the media side of things (not because it was the most important thing to him) because he could see my time slipping from Parkour.

I knew I wanted certain things from life, family has always been important. I just didn’t feel Parkour could deliver everything I wanted.

I remember an echoing point in my “Parkour career” when I was doing a Playstation event in Germany, and everyone had a late night. The next morning we were contracted to do a film shoot, no one wanted to do anything. Especially me… it took the enjoyment away from me, it was the first time I’d woken up to know I had to do Parkour. My choice was taken away, I’d never had to do Parkour before when I didn’t want to.

It wasn’t for me, for many others… fine. But for me, not so much.

Alex: Is it actually possible for someone who was as involved in Parkour as you were to completely stop it? Do you occasionally feel the need of going out and train?

Owen: Yes I do, I will still look at everything with my Parkour mindset, it’s like a gift I have been given from the years on non-stop training. I get thoughts in my head to vault a rail or jump up and start doing laches… occasionally I’ll see an opportunity to do a somersault with perfect conditions… nice grass, perfect take off and right height drop and I just can’t help myself. And alot of the time that the opportunity comes up it wouldn’t be appropriate to do so because I’ll be in a suit or working with others that under working environment I would have to tell them not to do it themselves. Quite funny really.

Alex: What do you think of Parkour in England nowadays? How has it changed? What are the biggest developments you can observe?

Owen: Biggest thing I’ve noticed… there are so many amazing people. Doing amazing things! I think it’s great to see the level of progression that has developed over the years. The thing that’s changed the most for me is that the talent is far beyond what it’s been before.

Alex: Anything you don’t like about Parkour or the Parkour scene in general?

Owen: I don’t know enough about the scene these days, I know what I didn’t like when I was about and I doubt that much has changed. Won’t bother talking about it now because it was hardly worth talking about it back then. Politics haven’t changed and never will, no matter where you go or what you do.

Alex: Have you had any experiences with bad attitude/disrespectful behaviour amongst „traceurs“?

Owen: Yes of course, it’s part of being a human being. No matter what you do you’ll always come across those whose only motivation is impressing others or feeling superior. This will never change, for example… everyone that drives a car has had to learn certain skills to be able to do it. But some people will drive like idiots because they think they command the road or they are more important than others for what ever reason. You’ll have good drivers and bad drivers, no matter what you are doing you will come across these people.

At the end of the day surround yourself with the people you trust and care about and forget about anyone else.

Alex: What do you think of the image Parkour has amongst the public? (in England) And why do you think that especially in England Parkour bans are beeing discussed and even enforced?

Owen: One of the key things I had to learnt was that (to some) Parkour is antisocial, antisocial is set by the society and if the majority see it as a problem then it is…

We live together as a community and at the end of the day we have to respect that. Don’t get me wrong I had my fair share of confrontations with people who didn’t understand what we were doing and wanted to argue and have a go. But if you want to train in a communal area you need to be respectful of the others that share the space. I’m not saying take shit, but be respectful and the “bigger” person. I’m not saying that just leave an area as soon as someone questions you. But speak to people and explain and try to gain understanding. I don’t believe this happens anymore, I know as I was leaving the scene I was seeing more and more disrespectful Traceurs…

We worked hard to try to gain respect of the people in the local area, and it didn’t always work but I know that a lot of that work has been undone.

This is important in Parkour, give the same amount of respect you give you body, to your environment that you train in, the people that are in it and those around you.

Alex: Do you have contact to friends who still train?

Owen: Yes I mentioned some of them above, it’s always great to hear from them and even better seeing the great things they’ve been able to achieve on the Internet.

Alex: If you would have to advise a beginner that wants to start Parkour one thing. What would it be?

Owen: Touch… practice your touch. Everything you do, make sure you do it quietly. If you do it and it’s loud then do it again until it’s not.

Alex: Is there anything you still want to add?

Owen: Parkour has given me so much! Although I don’t practice it anymore it will be ingrained within. If/As you move onto different things in life you’ll be surprised how much you can transfer.

I hope a non-practitioner‘s words can still mean something to those that are still moving.

The Interview Vault
Scroll to top