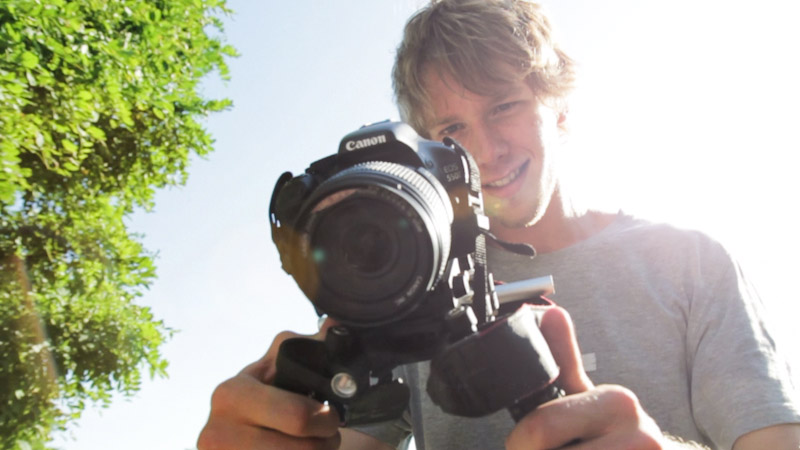 This interview is part of the archives. It was published on March 2nd 2013 when I was doing an interview series for our PKLinz Blog.

If you have not heard of Scott Bass you have probably seen his videos. Scott has been behind the camerea of some of the most influental parkour videos in Parkour history. With videos such as Live-On or action videos like Professor Longhair Big Chief Scott has inspired Millions around the gloe.

Alex: You have become well known in the worldwide Parkour community for filming and producing some of the best Parkour videos and short films out there.How did you get into filming Parkour?

Scott: I originaly got into filming parkour simply because I liked watching parkour videos and I saw a lot of things I felt I wanted to try to improve upon or learn to do. I made a few videos on a friends small little point and shoot (this was before HD was invented) and just enjoyed the response and the process of production in general, so I invested in some kit and made more.

Alex: Where do you lay the focus in your videos? How do you like to present Parkour to the viewer?

Scott: I like to try and present parkour in a lot of different ways, depending on what I want to get across in a video. For things like my recent ‘Goodbye Cambridge’ I wanted to show how Parkour can build a relationship with an environment, and how training and knowing that space can be beautiful. In some of my other videos, its just a presentation of how movement brings people together in a positive way. Most of the time, it isnt even a concious decision until I begin editing things together.

Alex: You have collaborated and still collaborate with some of the leading characters in the scene. Can you explain us the process of videomaking? Do you tell the athletes what to do? Do they tell you their ideas and you try to catch them as best as you can with your camera or is it more of a developing process while filming? Where does the videomaking process start and where does it end?

Scott: A lot of it depends on if there is an ‘end vision’ or not. With a lot of the ‘progression’ videos, we literally went out and filmed whatever was cool. Sometimes I would request a certain sequence, and sometimes I’d just be capturing what was happening at the time. My favourite filming experiences are when everyone gets together to create these choreographed long runs, such as in ‘Live On’ especially. Its such a fun experience as more and more people get involved, and its magical when the final result is this super long dynamic shot that’s taken the energy of so many people to create.

Alex: What is the most challenging aspect on filming Parkour?

Scott: Getting things right first time. With some moves or jumps, I have to bet that the angle I have is the best one I could find, and usually it isnt. This gets really hard as it can be exhausting for an athlete to shoot and reshoot a very difficult movement or jump, so I try to get it right first time as often as possible.

Alex: Parkour has a very intense videomaking culture. From your point of view: What are positive as well as negative effects of the huge culture of videomaking in connection with Parkour?

Scott: I think the connections people have made through youtube and videomaking in general are responsible for almost everyone that’s training to this day. Virtually everyone saw parkour either on TV or YouTube at some point first. If someone is inspired to move as result of my videos, then I’ve achieved something. The negative side is how the constant ‘raising the bar’ can lead to a culture of ‘one upping’ eachother, and most of the time this is ‘who can do the bigger move’. While in and of itself, progression is awesome, there does get to a stage where I feel the joy of parkour is lost and instead people focus too much of ‘filming for my showreel’ which is a real shame because it segments the community in my opinion.

Alex: What is your favourite Parkour related video / short film and why?

Scott: WIDE by Traceurs RU. First of all, its really old, I guess it was shot on a DSLR or something because its in HD, but its SUPER old. The production values of it are incredible though, the core concept is so simple ‘being so in touch with your environment you don’t need to use your eyes anymore’ and the cinematography is exquisite. The location is also especially gorgeous, and then the video hits you with one of the most incredible ‘WTF’ moments in a parkour video, all cut to a beautifully haunting soundtrack. This was made years before anyone knew who BAIT was and its still the best thing he’d been in.

Alex: What defines a good Parkour video for you?

Scott: A good parkour video promotes an emotional response in the viewer, one way or another. With some, its simply awe at the abilities someone has, and with others, it’s the blend of filmmaking or story or concept. ‘Storm Origins’ by Claudiu Voicu and ‘Down’ by Lukman (http://youtu.be/IePjgBMWHbk) are both great examples of either narrative driven, or concept driven videos.

Alex: If there is anything you could advise to anyone with the intention of shooting a Parkour video. What would it be?

Scott: Cut out the bullshit. All too often a video has way too much extra stuff that doesn’t actually result in anything, be it timelapses, black space between clips, nature shots, slowmotion etc. When I watch a video, if im not drawn in within 20 seconds or so, I’ll just close it. There isn’t really a secret recipie, its just a case of making it so the atmosphere you create hooks the viewer in.

Alex: As far as we know you are training quite some years now yourself. How would you describe the relation of filming and your training?

Scott: Yes I first experienced Parkour in 2005 I think. My relationship with training has always been a weird one, I’ve never really focused a lot of getting ‘good’ at parkour,  and to this day my skill level is acceptable at best. Its often difficult because I have to balance if I want to film, or train, and Im the kind of person that needs to practice something SO much to get good at it. Filming usually wins out because ultimately I’d like to be able to continue filming as a carreer, so the more I can do the better my abilities will get with filmmaking.

Alex: What are your plans for the future?

Alex: Is there anything you would like to state or add?

Scott: A lot of people in the scene don’t seem as connected as they used to, because its grown so much. I want to make a point that if anyone wants a chat, advice or to tell me how much my videos suck, just send me an email scott@ampisound.com!

Alex: Thank you for your time. All the best for the future!